Business
Deepening the Innovation of Scientific and Technological Innovation Mechanism

In order to promote independent innovation, it is undoubtedly crucial to overcome institutional barriers, and maximise the potential of technology as the primary productivity. China Unicom further deepened and improved the reform of the scientific and technological system, improved the scientific and technological innovation system and enhanced its organisational structure, and built an efficient scientific research system, in order to, improved its efficiency of the innovation system, and strived to stimulate innovation vitality.

Strengthening the ecological cooperation in scientific and technological innovation

China Unicom has adhered to open cooperation and strengthened the joint innovation of industry, university, research, and application. It has released the “Torch Plan” for China Unicom’s ecological cooperation, and put forward the “1 + 3 + 5 + N” scientific and technological innovation cooperation system. While focusing on the single blueprint of scientific and technological cooperation planning, it has established three cooperation models, which are, joint research and development, strategic investment and platform cooperation. It has also provided five major empowerments, through application demonstration, scale promotion, cooperation operation, research and procurement collaboration, investment and industry collaboration. Furthermore, it has also accelerated the implementation and operation in N forms, such as forming industrial alliances, joint laboratories, developing industrial demonstration bases and getting capital support. The Company has established 7 joint laboratories with industry leading scientific research units and universities such as Pengcheng Laboratory, Beijing Academy of Blockchain and Edge Computing, Beijing University of Posts and Telecommunications, Wuhan University and China Eastern Airlines. It has also signed 7 strategic agreements to carry out the construction of technological innovation ecosystem actively and effectively.

In December 2021, China Unicom officially released the “Scientific and Technological Innovation Cooperation Torch Plan” at the 2021 Partnership Conference to empower the five key responsibilities and businesses. It also consolidate the foundation for cooperative development. At the same time, it has also promoted and announced the development of the Reconfigurable Intelligent Surface (RIS) Technology Alliance Initiative and the Intelligent Super Perception Industry Joint Initiative.

In order to firmly grasp the initiative of innovation and development, it is crucial to accelerate the technology growth of “bottleneck” in important fields, and break through the industrial bottleneck effectively. China Unicom has given a full play as the main role of central enterprises in the scientific and technological innovation, and bravely served as the “source” of original technology, tapped into the “no man land” of science and technology, accelerated the breakthrough of “bottleneck” technology in important fields, explored the potential of digital technology, and promoted the safety, stability, independency and controllability of the industrial chain and supply chain.

In 2021, China Unicom undertook 7 national key R&D projects and have passed all the inspections.

Carrying out key and core technology research over the challenges

China Unicom has organised and implemented critical technology research in order to accelerate the forging of the long-term plates in the fields of new generation network, 5G enhancement, Big Data, and Vehicle Internet.

China Unicom’s next-generation of network innovation system (CubeNet3.0), has been confirmed by a panel of experts led by Academician Wu Hequan and Academician Liu Yunjie. The experts believe that the results are technologically advanced, innovative and forward-looking. The outcomes are conducive to creating a new generation of digital infrastructure that can be widely applied, flexible, customizable, synergetic, intelligent, and secure.

China Unicom has conducted foresight research on 6G scenarios and has moderately surpassed several forward-looking technologies, such as quantum information.

China Unicom has carried out risk analysis on the “bottleneck” of the current supply chain in the fields of IT and CT, which sorted out and identified 22 major risk points of the IT line and 18 points of the CT line. Risk response plans for each risk point have been proposed, laying out the strategic idea of “reducing risk to breakthrough” to organise core technology research that provides suggestions to reduce risks. In 2021, to tackle the “bottleneck” risks, the Company has focusedly examined the controllable and independent problems, and has invested nearly RMB1 billion in research and development to launch 15 core technology breakthrough projects in the field of domestic substitution. Risk reduction plans are proposed in combination with the core technology breakthrough tasks undertaken by the SASAC to overcome the “bottleneck”issue.

The core technology for Internet of Vehicles

Intensifying research in the area of basic hardware and software

China Unicom has accelerated the improvement of its shortcomings in the area of independent and controllable basic software and hardware. It has improved the core technological capabilities in the terminal field, and solved the problems such as core deficiency, core technology and core components. In 2021, the Company carried out differentiated competitiveness innovation mainly in the fields of CT and IT independence and controllability, and also, the development in 5G, optical network, cloud-network integration, digital innovation, Internet-oriented transformation and security has as well as been highly focused. 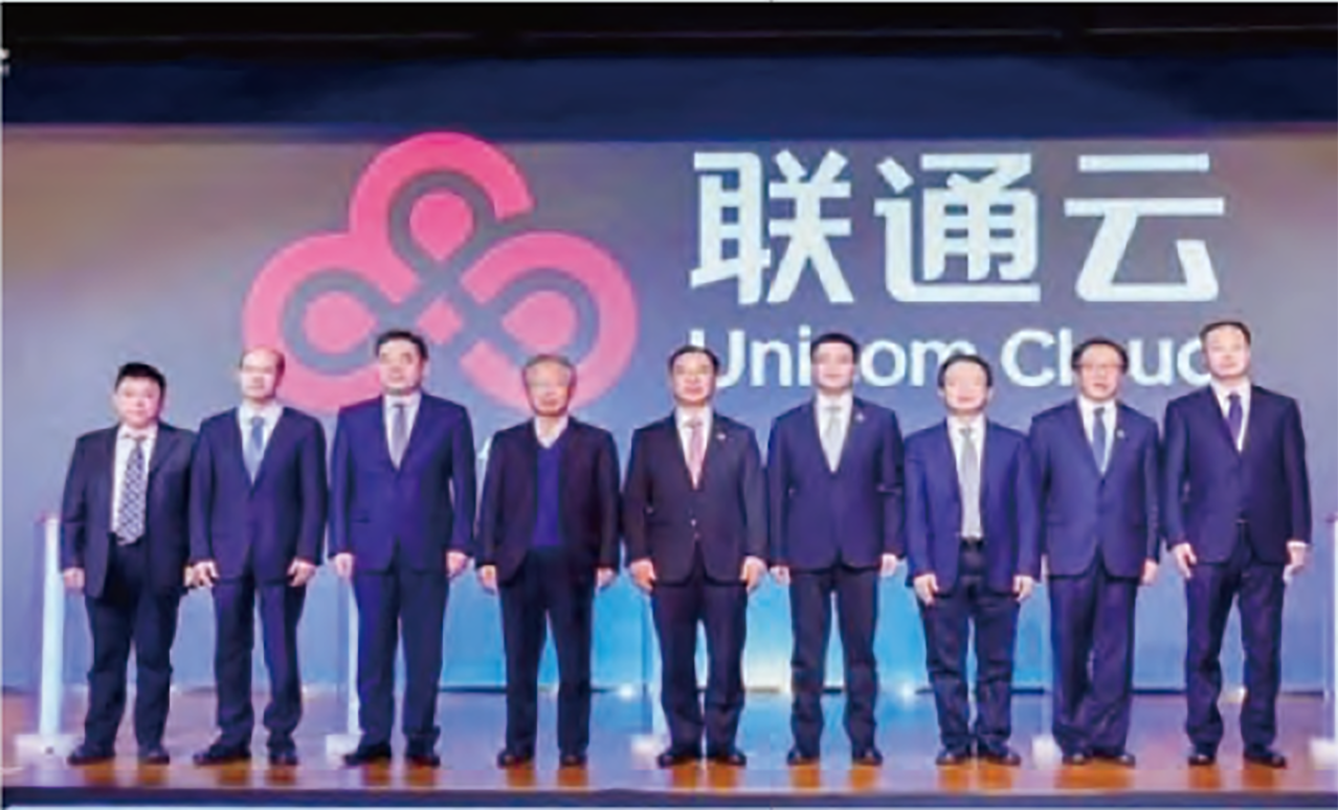 In 2021, China Unicom signed a proposal with 27 units that has included State Grid Corporation of China, China Construction Bank, Beijing Academy of Blockchain and Edge Computing, and initiated the establishment of the “Changan Chain Ecological Alliance”. At the same time, China Unicom joined the “China Science and Technology Association Engineer Consortium” as a council member, and joined the “Quantum Information Network Industry Alliance” as vice chairman.

Participating in the formulation of international and industry standards

China Unicom actively participates in international and domestic organizations to help determine standards and measures for the industry, which cover 5G, cloud computing, Big Data, Internet of Things, artificial intelligence, edge computing, blockchain, information security, and other strategic development areas. Such endeavour has effectively fostered the standardisation of the Company’s cutting-edge research and development, improved our influence over the industry as well as our discourse power in the international network space. 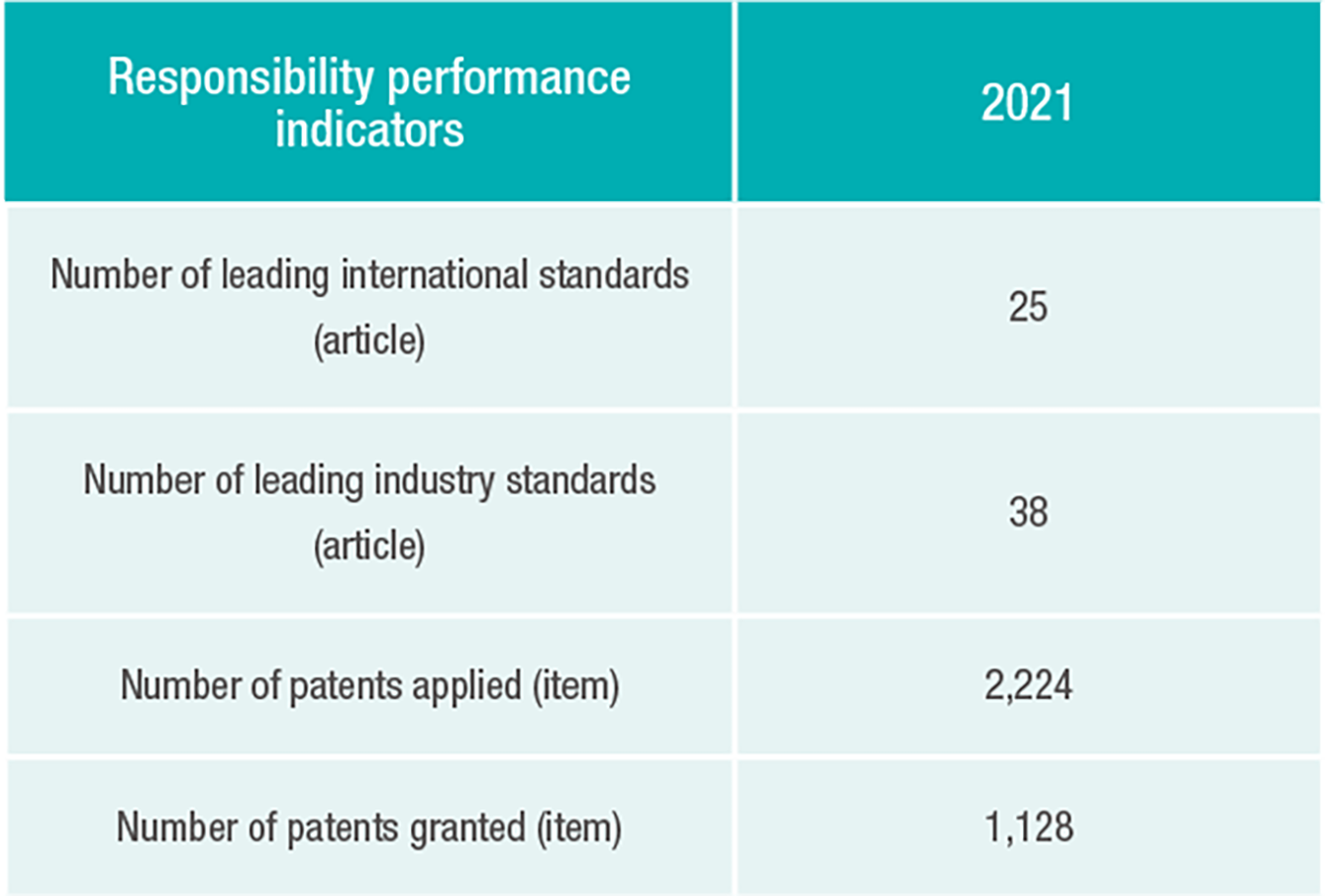 In 2021, China Unicom has adhered to intensive and independent research and development, upgraded the smart middle platform, upgraded and shared the core businesses, core capabilities, core data and core processes across the country, and built the smart middle platform into a core engine for comprehensive digital transformation. It promoted the digitisation of business operations, intelligent network operations, digital operation and management, and scenario-based data empowerment, and strengthened the connection of the Unicom Intelligence Brain.

Creating a unified digital base

China Unicom’s unified digital base was further consolidated to effectively support the Group’s R&D, operation and maintenance and capacity sharing.

China Unicom built the Unicom Intelligence Brain and released it through the Partner conference, laying a solid foundation for smart operation. 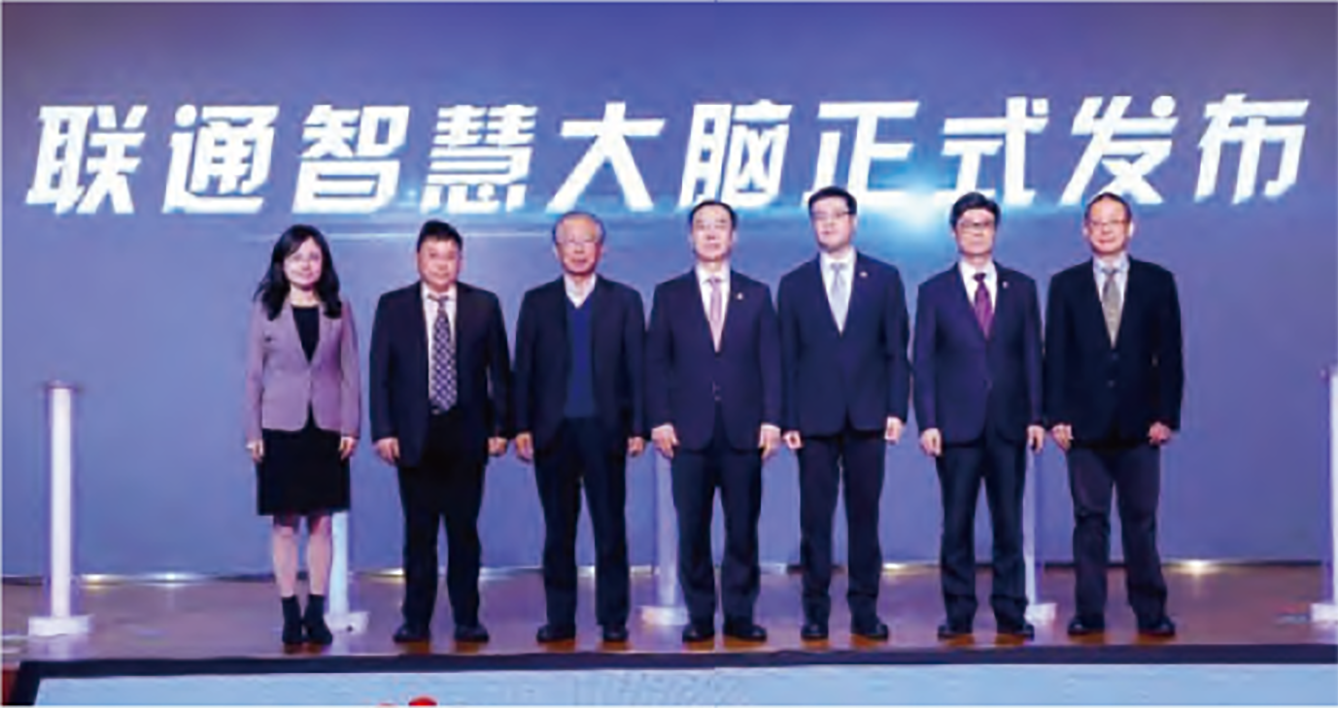 China Unicom Shanghai Branch has built a smart network operation brain, which has subversived the traditional working model and significantly improved production efficiency. Taking resources and data as the foundation of digital twins, the Company built the decision-making capability of “Network Brain” through the digital intelligence rules. At present, it has covered 1,397 scenarios and more than 30,000 rules. At the same time, it focuses on key businesses and key processes, and enhanced the transformation of operation model which the automation handling rate of network events has reached to 99.625%, hence, comprehensively empowers the digital operation of network. 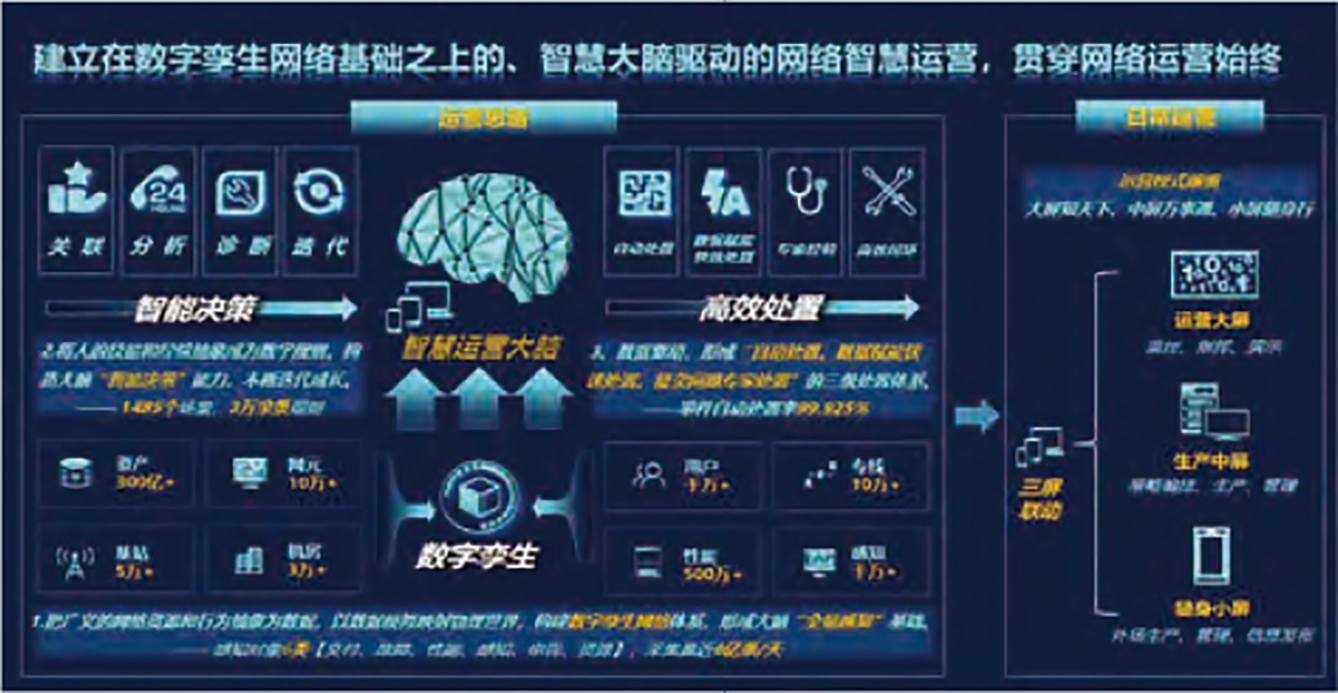 China Unicom has revitalized its Big Data, by giving full play to the value of data and technical elements, focusing on areas such as urban governance, population, economy and employment, and key industries such as government affairs, emergency response, ecology, culture and tourism, transportation, agriculture, industry, housing and construction, and finance. It adhered to independent research and development, and built key industries data platforms and application products.

Optimising the Layout of Industrial Innovation

China Unicom has integrated its innovative R&D capabilities, actively applied for and participated in the construction of national laboratories, focused on key areas to explore innovative models of industry, university, research and application, and improved the layout of industrial innovation.

China Unicom has played the role of central enterprise in innovation, actively applied for and participated in the construction of national-level laboratories, and took the lead in organising the application of the National Engineering Laboratory for the Next Generation of Internet Broadband Business Services. It was officially approved by the National Development and Reform Commission, and was included in the National Engineering Research Centre for new sequence management. During the evaluation period, the National Engineering Laboratory for the Next Generation of Internet Broadband Business Application seized the opportunities that are arising from the development of industrial Internet and the transformation of network broadband and software to achieve breakthroughs in new network architecture, key technologies for mobile and fixed broadband and high-definition video broadband applications. It actively participated in and supported major national strategic tasks and key projects, and made positive contributions to the implementation of major national strategies and projects such as Cyberpower, Digital China, Smart Winter Olympics and pandemic prevention and control. In the future, the Company will further improve its organisational structure, strengthen its own construction, increase investment in R&D resources, gather new network architecture, next generation Internet and broadband technology, and combine with the Company’s new strategy to continuously strengthen, optimise and expand its development.

Creating a consortium of industry, university, research and application

China Unicom focused on key regions such as the Beijing-Tianjin-Hebei Region, the Yangtze River Delta, the Guangdong-Hong Kong-Macao Greater Bay Area and Sichuan-Shaanxi-Chongqing Region, it actively explored the layout of the regional science and technology innovation centres of state-owned enterprises, and built an innovation consortium of industry, university, research and application. In 2021, the Western Innovation Institute and Chongqing 5G Integrated Innovation Centre were established in Xi’an and Chongqing to explore the innovative model of industry university-research-application.

In April 2021, China Unicom has entered into a strategic cooperation framework agreement with the People’s Government of Shaanxi Province, where China Unicom will be entitled to utilize optimally the resources of the Shaanxi University to jointly establish the Western Innovation Institute in collaboration with Xi’an Jiaotong University, Xidian University and Xi’an University of Posts and Telecommunications. On 6 September 2021, China Unicom Western Innovation Institute Co., Ltd. was officially established; the institute will focus on overcoming the “bottleneck” risks in key core technologies, laying out innovation chains, such as fundamental research, technology development, achievement transformation, talent cultivation and industry incubation around the connections of the industrial chain. The institute will build a collaborative innovation platform to gather together key resources, such as talents, technologies, products and businesses, innovation ecology, and pilot demonstration of scientific and technological innovation.